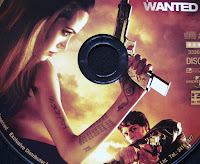 The Storyboard
An ordinary accountant was approached by a mysterious female assassin and offered to train him to be one of their own. He has unleashed his true potential with a burning desire to seek revenge for his father, only to discover that his father wanted him to live an ordinary life.

About...
(I) The Script: It was very well planned. Apart from the standard elements of an action movie, a few twists were inserted to excite the audience. Holes in the story fortunately did not impact on the movie.
(II) Shooting and Editing: There were a lot of emphasis on filming bullets curving and clashing. High speed car chases were a very well presented with elements of surprises.
(III) Sound and Special Effects: The background music played during the first third of the movie was brilliant! There were a lot of special effects throughout the movie. The train in the mountain gorge scene is still too difficult to present naturally, even with today's computer technology.

(V) Ending and Bonus Features: The ending was just right. The last scene echos one of the scenes at the beginning of the movie, to show the father-and-son bond perhaps?
What if...?
Wanted is a great action movie. The plot must be strengthen to make it an all-around movie. A number of ideas and concepts were presented in the movie but lacks sufficient depth. As mentioned above, there were holes in the movie that should be covered.
Overall...
This is definitely a movie for you if you loves car chase, shooting, combat, computer games and Angelina Jolie. And yes, Angelina Jolie is very sexy!
Drew saw Wanted on VCD.