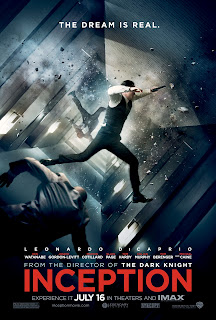 The Storyboard
A team of dream thief executes a complex plan to plant a simple idea into their target's mind. In order to achieve that, they must dream within this person's dream; and dream even more. As expected, things never go according to plan...
About...
(I) The Script: A truly intelligent story and script. The "dream within a dream" concept is mind blowing and yet entertaining.  Perhaps this concept is similar to the popular Neuro-linguistic programming (NLP) approach.
(II) Shooting and Editing: Very well planned and managed. The rules & terms were explained in the first third of the movie. The director then took the audience between the real world and four different levels of dreams with brilliant editing. There were also distinct differences between each level to avoid confusions.

(III) Sound and Special Effects: A-class computer animated special effects. Good; but perhaps spent too much time on presenting how the rain-drops and broken glasses scattered.

(IV) Must-see Scenes: The dream-architect scene featuring DiCaprio and Page. -- Lots of special effects with element of surprises.
The sequence that triggered every crew member to wake up from their different levels of dream. -- Very well handled by the director.

(V) Ending and Bonus Features: The last scene suggests that DiCaprio may be still trapped inside his dreams without knowing.  However, audience who stay until the end of the closing credits would be able to tell that DiCaprio's totem has stopped spinning (ie. He's back in the real world.).
What if...?
Can the movie be more simple instead? I suspects only 20% of the audience understood 80% of the content. These are also the people who can spot the imperfect parts. (eg. Watanabe's decision to purchase the whole airline would likely to drive his target away, as this deal involves public interest and will be published on newspapers.) In reality, most audience did not go to the cinema to have their brains overloaded.
Overall...
One of the most popular and well made movie of the year!  If you like complicated and twisted plots in movies; you must see Inception. If you don't, well, this movie stars Leonardo DiCaprio, Joseph Gordon-Levitt and Michael Caine.

DiCaprio's acting has improved so much since The Titanic and Catch Me If You Can! Christopher Nolan has proofed that he is a brilliant director whose movies will sell with or without Mr Batman.
Drew saw Inception at the cinema.