The Past Decade of Mobile Phones

October 27, 2010
It's October 2010. Yet, most of us can still remember the fresh taste when the new millennium has arrived. In the past decade, so many things has happened in the mobile phone industry.
Ten years ago, cellphones began to gain their popularity. We began to make wireless phone calls using these mobile devices. Over the years, we began to send short messages, send multi-media messages, make video calls, browse the web at turtle speed, at a reasonable speed, then finally at an acceptable speed. Nowadays, we spend more time touching and rolling on the screens of our smartphones than making phone calls. Even if we have had an intelligent phone conversation, we would still ask the other person to "send us an email to confirm" using mobile email.
The shape, also know as the form factor, or ID of cellphones has evolved over the years. The classic brick type has evolved to bar, slider, flip, swivel, QWETRY keyboard and then seem to converge to slate. The keyboard grew from twelve keys to QWETRY and then disappeared (virtual). The screens were able to display black and white, colour, more pixels and then very rich in colour and pixels. A full charge of the battery used to last two days (even up to a week). It now last just under one day. 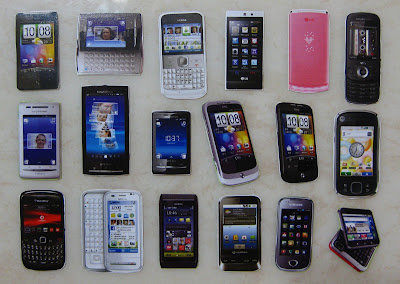 Cellphones have slowly replaced our watches, alarm clocks, portable music players, portable game stations and soon our cameras. All these has happened in ten short years.
The companies who made these wonderful devices have also changed. Let's briefly discuss the changes in these companies in the following posts.

The Past Decade for Nokia, Sony Ericsson and Motorola

The Past Decade for Apple, HTC and RIM

The Past Decade for Samsung, LG, Huawei and ZTE

(Read about other technologies that makes life simple under the Lifestyle tab.)