November 30, 2010
This photograph was taken at the Hung Hom entrance (towards Hong Kong Island direction) of Hong Kong's Cross-Harbour Tunnel on a Sunday at noon! If you a curious tourist like me who likes to watch traffic jams, Hong Kong put on daily traffic jam shows from 8am to 10pm, seven days a week! 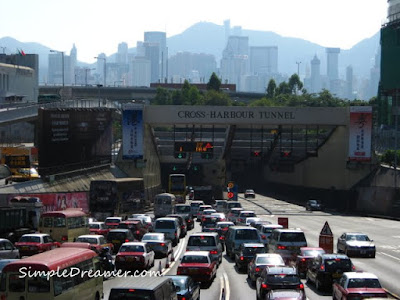 Just take Exit D at the Hung Hom MTR station and walk towards the footbridge.
Hong Kong has a total of three cross harbour tunnels. This was the first under water tunnel in Hong Kong. The other two tunnels were built to spread the traffic load. They have been in operation for years and have never resolved the congestion problems. This Wikipedia article explained why.
The other problem that you might be able to see from this picture is pollution. Can you really see the buildings on the other side of the harbour (in the background) with all the smog in between? The prime cause of this is believed to be Miss Breeze, who brought the dust and pollutants from Southern China to Hong Kong. (Or is it really?)
One interesting item you might discover from the picture and the video is the overwhelming number of bill broads at the tunnel's entrance. At least the drivers are entertained in their air conditioned vehicles during traffic jams.
Note: the traffic will hardly move if the same video was taken during rush hours.