October 06, 2012
The capital city of Thailand, Bangkok, have a world class airport! According to the local that is. The Suvarnabhumi Airport (สนามบินสุวรรณภูมิ in Thai), known as the "new" airport in Bangkok, recently had its 6th Anniversary.

I recalled my visit to this airport around five years ago. Although memories are fading away, I did remembered clearly that it was the only airport I have ever been to that broke my luggage. I also recalled the modern yet impressive architectural designed. Despite of breaking my luggage, I was very impressed until I came to the arrival hall.

Before my recent visit, I could still remember how crowded it was when the arrivals hall was jam packed with people. I felt that by having an arrival hall in the shape of an narrow strip, the modern airport has created its own Achilles' heel. No matter how quick you could get through immigration, baggage claim and customs, you would still be put on hold by the crowd at the narrow departure hall.

Five years has passed by and I landed in the same airport, I must admit, with a biased opinion. The airport has however changed. I made a wrong judgement by spending more time than I should before immigration. I did spend longer than I should at the duty free shop and currency exchange shop BEFORE immigration. By the time I lined up at immigration (i.e. passport control), extremely long queues were already formed.

Perhaps multiple planes arrive at a similar window, perhaps the officers are tired. The wait at immigration felt really very long. It was so long that by the time I arrived at luggage claim, my luggage was not on the belt! As you would imagine, my first reaction was, "Great! Last time they broke it, this time they lost it." I ran around like a mad bee and a crazy frog, asked several folks who were wearing uniforms, travelled both horizontally and vertically on the narrow departure hall; I eventually "found" my luggage. I must complement on how effective the airline staff were in removing unclaimed luggage on belts. I learned my lesson and will definitely rush to collect my luggage next time.


I was in a much more relaxed mode when I returned to the same airport as I was about to depart from the country. I had time to take photographs of the unusual escalators and the departure & arrival hall that looked like the Men In Black head quarter. I even had time for a meal after passport control. 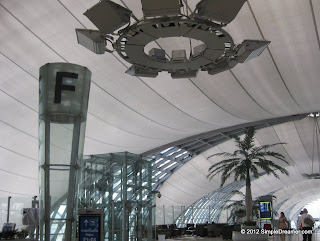 Those of you who have been following Simple Dreamer would know that, I really rarely bad mouth about restaurants that I have been to. As a warm reminder for our followers, there is a restaurant at Bangkok airport that you should seriously consider before you walk in. The food was average (as you would expect from airports). What was really "impressive" was how uncomfortable the chairs were. Couple this with the few extremely rude waitresses, and how extremely long it would take for the kitchen to cook a bowl of noodles (35 minutes, lucky I had time to kill); it would certainly make you stay at Thailand memorable. I shall avoid to name this restaurant in full. The name starts with Lemon and ends with Grass. The name has only two words tho.

There is always a bright side of any coin. What I really like at the Bangkok Airport was the interactive information board. It stated that there are trains that travels from the airport to Bangkok city center. Next time when I visit Bangkok, I will certainly try these train services (90 Baht per person only) to avoid playing more "mind games" with the taxi drivers who over charge.