November 18, 2012
In Chengdu City of China, next to the historical Wuhou Memorial Temple, there is an Ancient Chinese Street called Jinli. Literally translate to the "Lane of Bright and Beautiful", Jinli or Jin Li is a street full of traditional Chinese houses hosting shops that offer Chinese food and souvenir.

This Ancient Street felted a bit commercial, especially when I saw a Starbucks shop coated with a traditional Chinese exterior. However, when compared with places such as Tianzifang in Shanghai, Jinli felted more "traditional" than Tianzifang.

The setup of Jinli (or 錦里 in Chinese) follows a typical street or market in ancient China. Just by walking along the streets, one can easily imagine the lives of ancient Chinese citizens in their glory days. As there are many local Chinese tourist (most likely from other parts of China) at Jinli Ancient Chinese Street, it requires very little imagination to time travel to the past. Simply imagine that everyone is in traditional Chinese clothing or close your eyes to listen to the chatter in Chinese.

It is with no doubt that Jinli was setup to attract tourists. It was setup brilliantly. It kind of made the historical treasure next door, the Wuhou Memorial Temple, less attractive. Especially when Wuhou Temple charges $60 RMB admission, entry to Jinli is absolutely free. 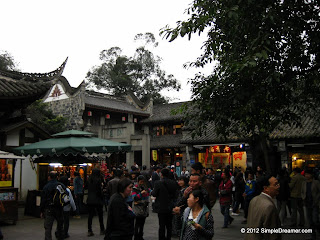 The souvenir shops offer machine made products as well as hand made products. Some of the souvenirs offered are unique to Sichuan province (where Chengdu City is situated). I personally liked the silk products and Panda themed products. Yes, Sichuan has highest population of the national treasure of China, Panda.

What really made Jinli amazing was the collection of food stores that offers a great variety of Chinese snacks. It is an enjoyable scene to see how the local tourists purchase and consume food items from these food stores. Check out this video and see how the chief prepares for Chengdu's famous snack "three artillery".

Jinli in Wuhou District is certain a place where foreign and local Chinese tourists should visit when they are in Chengdu. Whether you are after a taste of Chinese culture or Chinese snacks, Jinli can offer both. Your can indulge in Chinese snacks while your friends and families enjoy a cup of Starbucks coffee. Funny enough, I have been told that the Chinese Pinyi (phonetic sound) of this Ancient Street Jinli is very similar to that of Koi the fish! No wonder Chengdu put this ancient "fish" on it's map! 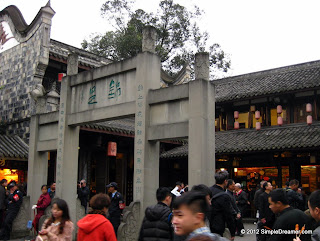