June 16, 2013
We have talked about the overwhelming number of neon signs and billboards in Mong Kok of Hong Kong in the previous post. In fact, one can find hundreds and thousands of such signs along Nathan Road of Kowloon.

Jordan is home of the famous Temple Street Night Market and Yue Hwa Chinese Department Store. It also offer plenty of local restaurants, cafe and shops. Jordan itself is also a red light district, hence some of the neon signs and billboards in Jordan were erected by night clubs in the area. Having said that, there are still plenty of signs that are "standard commercials". 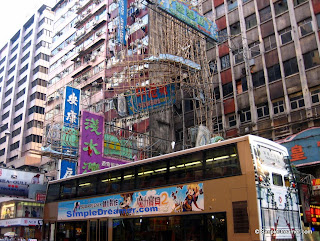 Some time ago, I came across the aftermath of an accident happened when workers were removing an old neon sign for a night club in Jordan. Local workers used traditional Hong Kong style bamboo scaffolding to remove the heavy light box. For some reason, the load was not even. The neon sign and its bamboo scaffolding ended up hanging over Nathan Road, which is one of Hong Kong's busiest street! It goes without saying that fireman came to the rescue and the matter was resolved with any major issues.