Welcome to Hong Kong Travel Blog Hotel Guide! Our hotel guide share facts and photos of great hotels. We go beyond the hotel rooms, we use a FLAG approach to present hotels by their Features, Location, Attractions and Gossips. Together with the main stream review and critics, we'd hope you can build a 360 degrees perspective of your desired hotel. Feel free to utilize our hotel guide before you make your hotel reservations!

A hotel designed in Victorian style, once inside the Hong Kong Disneyland Hotel, one may forget that you are inside the Disneyland resort as all the characters are nicely hidden. The hotel does however remind you from time to time by having Disney characters walk by and take photographs with guests. In the backyard of the Hong Kong Disneyland Hotel is the huge Mickey Mouse Maze, a maze made of hedges organized in the shape of Mickey's head. It would be a really fun outdoor activity for your kids as there are plenty of running space around the Mickey Maze.

Every morning, hotel guests can enjoy buffet breakfast at the Hong Kong Disneyland Hotel with Disney cartoon characters. Dressed-up characters including Micky Mouse and Minnie Mouse would walk into the hotel restaurant and take photographs with diners. Although it's called Buffet with Disney Friends, these characters would not physically sit down and eat with you. They do not have a mouth anyway.

It is a kingdom on its own. The Hong Kong Disneyland Hotel is on the Lantau Island, meaning that it is far from the rest of Hong Kong. Furthermore, as Hong Kong Disneyland is designed as a resort. Unless you drive, you would have to take its shuttle bus if you wish to go from point A to B within the whole Disneyland resort area.

If you a Disney fan who still want to explore the real Hong Kong (rather than just the fictional world) you can take the MTR (Hong Kong's subway) from the Disneyland Resort Station. Be warned, the journey is a long, consider that fact that you'd have to switch from shuttle bus to the Disneyland Resort line, then to the Tung Chung line, then to other MTR lines. Taking a taxi may not also be a wise decision as there are plenty of driving involved. 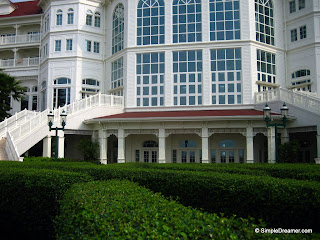 If your stay in Hong Kong is long enough, you may wish to stay in the Hong Kong Disneyland Hotel for one night, then switch to another hotel that is closer to the real Hong Kong.

Apart from the Disneyland, you can take a walk at the nearby Inspiration Lake, a public lake built by Disney that is freely opened for the general public. If you have spare time, you may also want to visit the other attractions on the Lantau Island.

If you have extra time, check out an 'abundant' pier behind the Hong Kong Disneyland Hotel. It is called the Disneyland Resort Pier and it is hardly used. Even the magic of Mickey cannot make everything go into his favour. That's life!

More attractions on the Lantau Island