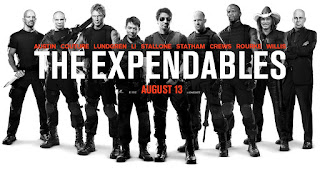 The Storyboard
A bunch of beefy boys ("senior" mercenaries) volunteered to overthrow a dictator on a remote island in South America. The team blew up almost everything on the island and managed to survive with only minor scratch. A true Rambo style movie!
About...
(I) The Script: Cleverly written with lots of effective jokes inserted throughout the movie. This action movie has a plot and a message!


(II) Shooting and Editing: Actions scenes were clean and sharp at a just-right rhythm.  However, the combat scenes were a bit hard to follow.

(IV) Must-see Scenes: The church scene featuring only Arnold Schwarzenegger, Bruce Willis and Sylvester Stallone. -- The three action icons of the 1980s.
The garage scene featuring Sylvester Stallone and Mickey Rourke. -- It was a very touching scene, brilliant acting by Rourke.
(V) Ending and Bonus Features: It was a happy ending for the good guys; unhappy ending for the bad guys. The Expendables crews all managed to survived and continue to ride their motorbikes.
What if...?
The Expendables is already armed with A-class action stars. This greedy fan wonders how it would be if Donnie Yen, Jean Clark VanDam, Wesley Snipes and The Rock also appear in the movie!
Overall...
If you like 1980s Rambo style movies, Sylvester Stallone or Jason Statham, you will enjoy The Expendables. A big salute to Stallone for putting together a team of action stars and filmed a 2010 Rambo style blockbuster!
Drew saw The Expendables at the cinema.