Located at the water front of Tsim Sha Tsui, the Harbour City is a shopping complex as well as a port for international cruises. Harbour City has been famous for its annual Christmas display for decades, the Chinese New Year plus St. Valentine's Day display of this year is simple yet impressive.

Using the love-blooming peach blossoms and their charming pink as a theme colour, the square in front of the Harbour City is filled with joy and love. 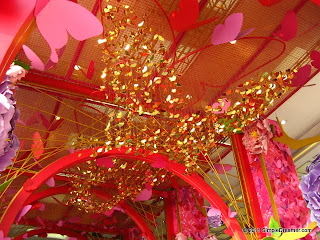 The Harbour City is a combination of four blocks of shopping malls, hotel and office towers. It is one of the largest shopping complex in Tsim Sha Tsui. Shoppers can easily notice the change in theme as they walk from one shopping mall to another, under a single roof.

The Harbour City was built on a strip of land between the waterfront and Canton Road. Due to the growth in numbers of mainland Chinese tourist and their love of designer brand products, street level shops of the Harbour City are now occupied by mostly European designer brands. All the other talents of the Harbour City are chained retail stores, shops or restaurants. With such an impressive collection of wealthy talents, the landlord should have a lot to offer when it comes to Chinese New Year displays.