February 27, 2011
Sun Yat-sen, one of the most influential person in modern Chinese history, was the driving force behind the overthrown of the last imperial dynasty of China. Ofter recognized as the Founding Father of the new China,  as one would imagine, there are many Museums dedicated to such most respected man across Mainland China, Taiwan and Hong Kong.
The Dr Sun Yat-sen Museum in Hong Kong displays historical artifacts that are related to Dr Sun, as well as presenting an overview of his life and political career.
After reading the descriptions and watching the videos in the museum, I personally found that the political career of Dr Sun was full of ups and downs, perhaps a bit too rough. His vision of democracy in China is still only a "concept" in today's China. Nonetheless, the philosophies of Dr Sun are being studied and respect by many people. 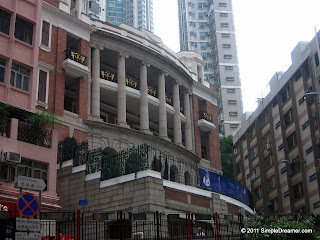 Dr Sun graduated from the University of Hong Kong in his teenage years. It is believed that Dr Sun was active in the area around the University and the current Museum. The site of the Dr Sun Yat-Sen Museum, however, has little to do with Dr Sun. It is a declared monument that was originally named Kom Tong Hall, the mansion of a wealthy family in the early 1900s.

The Dr Sun Yat-sen Museum is a fair walk from Central. It is however one of stops of the Dr Sun Yat-sen historical trail. This year is the Centenary of China's 1911 Revolution. It might be a reason for you to follow the footsteps of a revolutionary and political leader.
Hong Kong Travel