February 12, 2011
The 1881 Heritage at Tsim Sha Tsui put up impressive Christmas displays in 2010. Perhaps the landlord sees that Chinese New Year concept does not fit with the theme of their shopping complex, a smaller scaled Valentine's Day display was set up. It is on displayed since the pre-Chinese New Year period.
Fortunately, 2011 is the Year of the Hare, and the Chinese New Year day and St. Valentine's day are only ten days apart. Having one or two rabbits at their displays would be sufficient during the Chinese New Year to Valentine's Day period.
While the little romantic-garden was set up elegantly, the rabbit grass sculptures were done beautifully; it appears to be a cost saving exercise. One could not help but wonder: is this a result of someone blowing the budget by setting up those impressive 2010 Christmas displays?
Having said that, the theme of the shopping complex is historic European. Having strong Chinese-themed decors and displays might not match the former British Marine Police Headquarters. 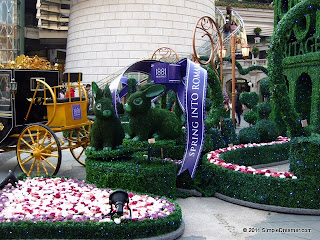 Nearby Attractions (within walking distance):
K11, The Peninsula Hotel