February 04, 2011
On the evening of the Chinese New Year day, the Hong Kong Tourism Board has organized a parade of decorated floats and performers. At the start point of this parade, the Hong Kong Cultural Centre Plaza, an outdoor display has been setup to mark the beginning of the party.
The theme of the parade and these displays is "World City World Party". Characters of different ethnic groups in Asia were presented on a rather "Chinese" platform.
Frequent visitors of our site might have noticed that this Plaza is where the famous Hong Kong Tsim Sha Tsui Clock Tower and the Hong Kong Cultural Centre are located. It is also a great location to enjoy the daily outdoor light and laser show - A Symphony of Lights. 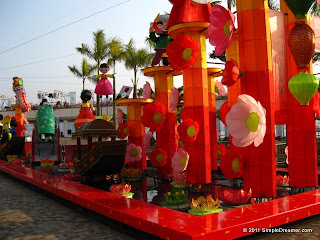 These colourful temporary outdoor Chinese New Year displays creates a nice picture with the two landmarks on such a sunny afternoon.
Shows and Expos