March 29, 2011
Serving customers in the Sheung Wan district since 1906, the Western Market is the oldest surviving market building in Hong Kong. The current structure was the North block of the original market which became a declared monument.
The four-story building is in Edwardian style that was popular in England in the early 20th century. In 2003, the exterior was refurbished to offer a photogenic look; and the interior was renewed to host a small number of tenants. 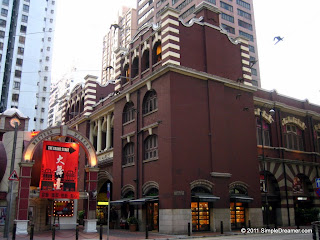 Compared to its marvelous outlook, the goods and services offered at the Western Market are rather average. In addition, it is not at the most convenient location. It is recommended to think twice before making a dedicated trip to the Sheung Wan Western Market.