May 10, 2012
Lin, a name that has rocked the world of New York basketball fans since February 2012. With the retirement of Yao Min from NBA, Jeremy Lin, a true American with a Chinese/Taiwanese descent has filled the lonely gaps of millions of basketball fans in Asia.

Prior to his recent injury, the way Lin played was absolutely stunning. New York Knicks needed a player who was really willing to "play" for a long time. I was fortunate enough to travel to Madison Square Garden to smell, hear, watch and feel Linsanity in March this year. 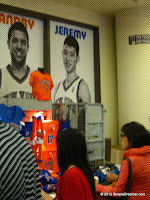 Jeremy Lin was definitely the crowd's favourite on that night! Linsanity signs, t-shirts and Lin's basketball jersey were everywhere. The whole stadium was screaming when he was introduced into the court. Whenever he has control of the ball, the crowd cheered with him. And Lin did put up a good show. It was clear to the audience that Lin was the only player in court who was willing to give 200% efforts to play the game. Although he has only scored a few times, his assist and steal figures were great! New York Knicks won their game on that night, both myself and the fan were over the moon.

Apart from the basketball game itself, New York Knicks (as a business) ran a good show on that night. The audience were constantly entertained and they were able to maintain the atmosphere brilliantly. Having said that, it is open secret that New York Knicks need more players who are willing to play like Jeremy Lin.

The media predicts that tonight's game against Heat (May 9) will most likely be Knicks' last game of this season. It is also uncertain that whether Jeremy Lin can make it to the game. Anyways, all the best to the Knicks tonight. We all look forward to more Lin's game in the next season! 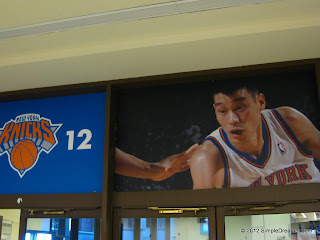