November 16, 2012
Just when one have little expectation of a domestic airport terminal in an inland Chinese city, Chengdu Shuangliu International Airport left an exceptionally good impression. It is so good that it gives a wow upon arrival, and it leaves a wow before departure. 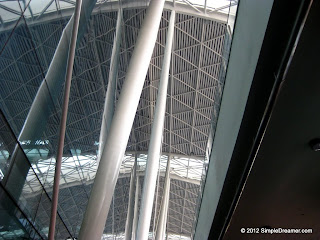 I did not have a chance to see the International terminal of Chengdu Shuangliu International Airport, I would imagine that it would be either as good or better than its domestic terminal. Search for photographs of the exterior of this airport and you will understand what I mean.

In terms of structural design, the "hardware", Chengdu Shuangliu Airport in China is certainly amongst the ranks of Hong Kong International Airport, Bangkok Suvarnabhumi Airport and New Delhi Indira Gandhi International Airport. These airports are all modern, huge and dynamic. In terms of how it is operated, the "software", Chengdu airport did not offered any unpleasant surprises like its counterpart in Bangkok. 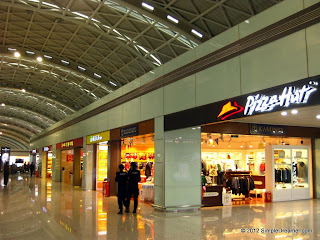 Security was tight during my recent visit, probably due to the shift of China's political power in Beijing. Nonetheless, it was quite pleasing to see how Chinese took air safety as a priority. Beside security checks, Shuangliu airport served with heart and offered drinking water in room temperature, cold or warm. This meant a lot for travellers who just got off the plane!

A shop in the Chengdu Shuangliu International Airport offered a moment of joy before I depart from the airport. A picture says a thousand words; a picture implies a thousand words. Take a look at Micky and Minnie Mouse at the official Disney merchandise shop at the airport. This is hopefully not something that you will see at Hong Kong Disneyland!